Vermont often tops the list as one of the ‘greenest’ states in the US. So it’s no surprise that the state eagerly embraced its leadership role as the first US state to recycle single-use batteries. This past June–six months after the law went into effect, single-use battery collections were up 2,947% over 2015. Even rechargeable battery collections were up 29% year over year.

“We expected a big bump in collections in the first months after the law went into effect as people recycled some of the batteries they had been hoarding,” said Todd Ellis, director, Stewardship Programs, at Call2Recycle. “But we have been amazed at the response.”

Ellis expects another collections upsurge when Daylight Savings Time kicks in on Sun., Nov. 6. That’s the date when many people replace the batteries in their smoke detectors and Call2Recycle is encouraging them to recycle instead of throwing them in the trash. Click here for more information.

For a state as environmentally conscious as Vermont, the change is positive. Less batteries are going into the landfill. Battery recycling is easier; Vermont residents no longer need to separate single-use from rechargeable batteries prior to recycling. And residents are satisfied knowing that the byproducts are being used for purposes, such as the manufacture of new batteries, stainless steel and fertilizer.

The continued success of the program rests in a great part on the shoulders of the solid waste districts in Vermont. The districts are responsible for battery collections and districts such Northeast Kingdom, Chittenden and Southern Windsor have created their own unique programs to reach out to the local communities.

For example, Chittenden Solid Waste District, is home to Burlington, Vermont’s most populous city with a quarter of the state’s population. Mandatory recycling of blue bin recyclables has been required in this county since 1993, well before the Universal Recycling Law required recycling state-wide in 2015.  Three years ago, the solid waste district started collecting single-use batteries along with its rechargeable batteries as part of its hazardous waste collection program at its seven recycling centers.

Residents and businesses can encouraged to bring their batteries to their nearest CSWD Drop-off Center, hazardous waste collection facility or The Environmental Depot. “The Rover” mobile collection unit regularly visits local town to collect household hazardous waste. As of the end of July, single-use batteries made up more than half of its 2016 battery shipments, up from under 25% during the previous two years.

Jen Holliday, compliance program and product stewardship manager for Chittenden and chair and founder of the Vermont Product Stewardship Council, said, “Convenience is an important aspect of having a successful program. We not only accept used household batteries at our facilities, we also encourage people to visit Call2Recycle retail locations throughout Vermont. Our goal is to get people on board over the long term.” Holliday played a leading role in passage of the single-use battery recycling law.

To get the word out, Chittenden features the program on the county web site, in its household hazardous waste brochures and flyers, its monthly e-newsletter, blogs, ads and on Twitter. The district has also been heavily promoting the new program on its weekly radio program on WJOY. 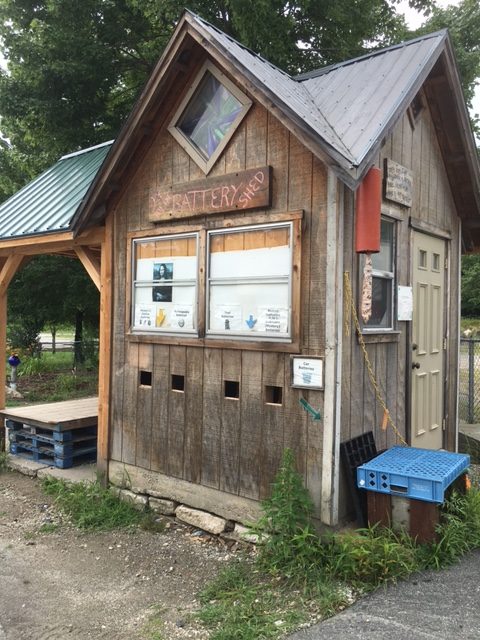 Mary O’Brien, recycling coordinator for the Southern Windsor/Windham Counties Solid Waste Management District (SWWCSWMD), adopted a very different strategy for the 14 towns and five transfer stations in her district. She uses old-fashioned bulletin boards and new technologies such as social media and the district web site to educate residents. “Intuitively people don’t feel good about throwing away batteries. They know there is value and materials should be reused,” said O’Brien. “If we educate them over time, our residents will do the right thing.”

Southern Windsor’s secret weapon is Dan Farrar, who works at the Springfield transfer station, the largest in the district. Several years ago Farrar built a battery shed with separate compartments for different battery types, including both single-use and rechargeable. Farrar’s initiative helped Springfield achieve the highest collection rate in the district. As of July 31, Springfield’s battery collections were up almost threefold over 2015. Single-use battery collections are up significantly; rechargeable batteries have also seen a bump. In effect, single-use recycling is driving an increase in all battery recycling.

The NEKWMD was the first Vermont solid waste district to start collecting primary batteries in November 2011, placing posters and other literature at the 28 recycling depots/ transfer stations throughout the district to encourage participation by current recyclers. In addition, the staff attends music festivals, county fairs, schools, and other events to promote recycling of many products, not just batteries. Information is also available on the NEKWMD website. In addition, all depot attendants have been trained to answer consumers’ questions.

For its part, Call2Recycle not only collects and recycles batteries from these districts, but also promotes the program to residents through news articles, radio, emails, bus signs and newspaper ads. Call2Recycle also expanded its network to 135 collection sites; now 96% of Vermont residents have a Call2Recycle collection site within 10 miles of their homes.

The combined efforts of solid waste districts like Northeast Kingdom, Chittenden and Southern Windsor prove that single-use battery recycling can be successfully incorporated into any community, regardless of its size or geography. It also confirms that the state of Vermont is truly deserving of its position as one of the ‘greenest’ states in the nation.

For more information on recycling batteries in Vermont, visit this website. To read more about making a difference by recycling during Daylight Savings Time, click here.